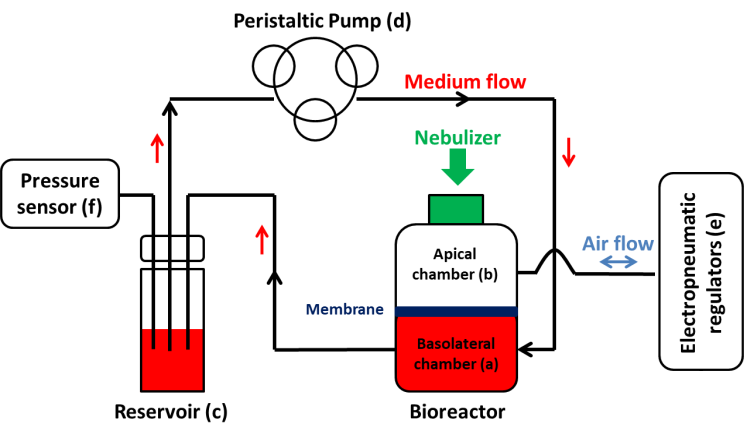 Nano and micro particles are widely used in industrial, household and medicinal applications. These particles can cause inflammation and stress in lung tissue, leading to the development of diseases, such as asthma or chronic obstructive pulmonary disease (COPD). However, their effect on human tissue is not well understood. In fact, the interaction between particles and epithelial cells is complex, and it is mediated by the rhythmic contraction of the diaphragm. In order to reproduce this cyclic motion and to simulate physiological lung muscle stretching, an air-liquid interface bioreactor with a mobile elastic membrane was designed at Research Centre E. Piaggio. This system (Figure 1), named MALI (Moving Air Liquid Interface bioreactor), consists of an aerosol generator and a bioreactor with a moving membrane placed between an air-liquid interface to study drug and nanoparticle deposition and passage. Next steps will consist in making improvements on both the biocompatibility and the design of the bioreactor.