The MCmB is an innovative system for dynamic cell cultures and co-cultures. The modular chamber is designed with shape and dimensions similar to the 24-MultiWell, and consists of a cell culture chamber made of silicon polymer. The modular chambers can be also connected together in series or in parallel as desired, in order toreplicate tissue/tissue and tissue/organs communications and recreate in vitro models of metabolism or diseases using the organomics approach.

Short description of the system

The MCmB is able to apply  controlled flow allowing a high medium flow rate and non turbulent fluid dynamics at the same time. It was designed using hepatocytes as a reference cell type, because those cells are particularly sensitive to the shear stress and low oxygen concentration.

Figure: MCmB chamber connection to simulate an in vivo like system

The bioreactor design process started with a finite-element model (FEM) ofthe cell culture chambers (Fig. 2.a), developed in order to study the shear stress (Fig.2.b) and the oxygen concentration (Fig.2.c) at the cell surface. The FEM analysis was performed using COMSOL Multiphysics 3.3 and Cosmos Floworks, a SolidworksTM extension. A parametric model was developed in order to observe the effect of changes in height on flow parameters (flow speed,shear stress, and stream lines) and oxygen concentration. The effect of increasing flow rate on the same parameters was also investigated.

Application: an in-vitro model of diabetes

Connected cultures of hepatocytes, adipocytes and endothelial cells in the MCmB were used to investigate the regulation of systemic metabolism in vitro. The system was designed using allometric scaling, focusing on glucose and lipid processing for their relevance to diabetes and metabolic disorders  . Investigations on the role of adipose tissue and the effects of hyperglycemia, simulating diabetes type I and type II in the systemic model have been reported (see publications)  . The results show that although hepatocytes are the master regulator, all 3 cell types are necessary to obtain homeostatic-like regulation of metabolites. Specifically, as in the in-vivo context, we observed: 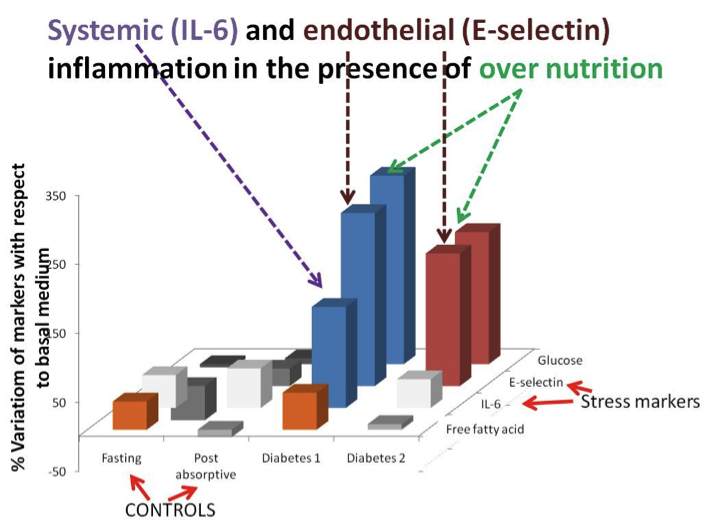