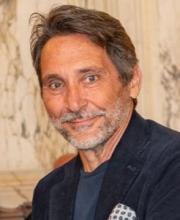 From January, 2023, he is the Editor in Chief of the International Journal of Robotics Reserach (IJRR), the first scientific journal in Robotics. He has been the founding Editor-in-Chief of the IEEE Robotics and Automation Letters  (2015-2019), which rapidly became the top Robotics journal by number of submissions. He has organized the first WorldHaptics Conference (2005), today the premier conference in the field. He is a founder and President of the Italian Institute of Robotics and Intelligent Machines (I-RIM) (since 2019),

His main research interests are in Robotics, Haptics, and Control Systems. He has published more than 500 papers on international journals, books, and refereed conferences. For his fundamental research on human and robot hands the European Research Council awarded him with several grants, including an Advanced Grant in 2012, an ongoing Synergy Grant in 2019, and three Proof-of-Concept grants. He is the scientific coordinator of the JOiiNT Lab, an advanced tech transfer lab with leading-edge industries in Bergamo, Italy. He is the recipient of several awards and honors.

A Century of Artificial Hands, a critical review of design principles, control, applications in the last 106 years with 252 references.