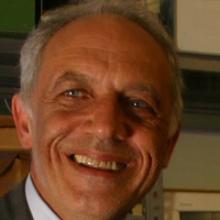 Danilo De Rossi received the “Laurea” degree in Chemical Engineering from the University of Genoa in 1976. From 1976 to 1981 he was researcher of the Institute of Clinical Physiology of C.N.R. He had appointments for teaching and research in Australia, Brasil, France, Japan and USA. He joined the Faculty of Engineering in the University of Pisa in 1982 where he is currently Full Professor of Bioengineering and coordinator of the Bioengineering Group at the Interdepartmental Research Centre “E. Piaggio”. His scientific activities are related to the physics of organic and polymeric materials, and to the design of sensors and actuators for bioengineering and robotics. He received the “Bioengineering Forum Award” of the Biological Engineering Society (UK) in 1980, and the “Young Investigator Award” of the American Society for Artificial Organs (USA) in 1985. He is author of over 270 peer reviewed papers on international science journals and peer reviewed proceedings, co-inventor of 14 patents and co-author of 8 books.

Other Experience and Professional Memberships

Italian MURST Project n° 795 Art. 10 Lex 46/1982 1999-2005 Development and evaluation of an integrated system for the characterization of olive oil quality based on an artificial olfactory system.